What are dental sealants?

The term "dental sealant" or " tooth sealant " refers to a coating which a dentist bonds into the grooves of the chewing surface of a tooth as a means of helping to prevent the formation of tooth decay ("cavities").

Why are dental sealants placed on teeth? 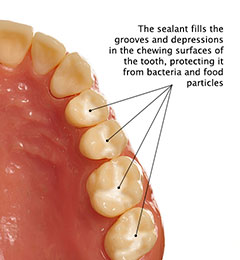 Tooth decay is caused by the white film that forms on a person's teeth, we refer to this film as "plaque". The longer plaque remains on a tooth´s surface the more likely it will be able to create a cavity. The idea behind brushing teeth is that the plaque that has accumulated on a tooth´s surface is scrubbed off. Some teeth however, because of their anatomy, are harder to effectively clean than others.

Some back teeth, especially molars, are difficult for a person to clean because the grooves in the chewing part of the tooth (the tooth´s "pits and fissures") are deep and narrow. Even though the person brushes they can not clean the plaque off adequately because the bristles of their toothbrush are literally too large to gain access into the bottom of the tooth´s grooves. Because some plaque is not cleaned off a cavity can develop.

We can combat this situation by bonding the dental sealant into the grooves of a tooth. The net result is that the surface of the tooth is somewhat flatter and smoother. There are no longer any places on the chewing part of the tooth that the bristles of a toothbrush can't reach and clean. Since plaque can be removed more easily and effectively, there is much less chance that decay will start.

Another difficulty related to deep grooves in teeth is that sometimes the thickness of the enamel at the base of the groove is thinner than the enamel that encases other portions of the tooth. This means that not only can deep narrow grooves make it more likely a person´s tooth will develop decay (because the tooth can´t be cleaned effectively) but also that the cavity which does form has an easier time of penetrating the enamel layer because it is thinner.